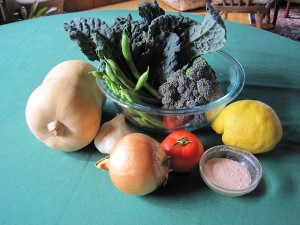 Back in the ‘90s, spirulina, bee pollen, and bee propolis were the kinds of foods termed “superfoods” because they’re the foods that have everything the body needs to thrive, so, theoretically, you could live on any of them, exclusively!

Then, foods like chia seeds, and whole grain amaranth and quinoa came on the scene as “superfoods” because of their super-high protein content.

Now we hear about foods with the widest spectrum of vitamins and minerals being superfoods like sweet potato, kale, and white mulberries.

And of course, there’s the most popular, current, superfood camp, which is all about the most antioxidants (cancer-fighters) like blueberries, goji berries, green tea, turmeric, and raw cacao.

Of course, it’d be ideal to get all of these foods into our bodies regularly, but life doesn’t usually unfold so conveniently, say, with affordable natural food stores on every corner.

But there’s hope! One of the most credible natural health gurus today, Dr. Joseph Mercola, lists several of the more common foods that we can get at most grocery stores and farmer’s markets, in certain combinations as “superfoods” because they synergistically maximize antioxidant potency and nutrient profile and nutrient assimilation. Awesome!

Tomatoes + Olive Oil…Lycopene, a carotenoid antioxidant in vegetables like tomatoes, is one of the key reasons why tomatoes are so good for you. However, when you eat tomatoes with olive oil, the antioxidant activity of the lycopene is greatly increased.

Brussels Sprouts + Olive Oil…Brussels sprouts contain sulfur-containing compounds called glucosinolates, which your body uses to make isothiocyanates. These activate cancer-fighting enzyme systems in your body. Brussels sprouts have been linked to the prevention of a number of cancers, including colon cancer, ovarian cancer, and others. Brussels sprouts are also rich in vitamin K, with about 243 percent of the recommended daily value in one cup. Vitamin K is a fat-soluble nutrient, so eating Brussels sprouts along with a healthy fat like good quality virgin olive oil will help increase its absorption.

Raw Dark Chocolate + Apples w/the peel…Eating apples is associated with a lower risk of death from heart disease, an association that’s thought to be related to their content of antioxidant flavonoids, including the anti-inflammatory quercetin. Dark chocolate, which is rich in antioxidant catechins, has also been found to support heart health. When paired, dark chocolate and apples have been shown to help break up blood clots. For chocolate, the closer your cocoa is to its natural raw state (cacao), the higher its assimilate-able nutritional value.

Green Tea + Black Pepper…Black pepper contains a substance called piperine, which not only gives it its pungent flavor, but also blocks the formation of new fat cells. When combined with capsaicin in cayenne pepper, black pepper was also found to burn as many calories as taking a 20-minute walk. Brewed tea with garlic, ginger, and black pepper makes a perfect marinade for meats or seafoods.

Turmeric + Black Pepper…Turmeric contains curcumin, the polyphenol identified as its primary active component and which exhibits over 150 potentially therapeutic activities, which include antioxidant, anti-inflammatory, and anti-cancer properties. If you pair the turmeric with black pepper, it improves the bioavailability of curcumin by 1000 times! WOW!!

Kale + Almonds/Macadamias/Pecans…Just one cup of kale will flood your body with disease-fighting vitamins K, E, A, and C, along with respectable amounts of manganese, copper, B vitamins, fiber, calcium, and potassium. Vitamins K, E and A are fat-soluble, which is where the raw nuts come in to help ensure proper absorption. Also, a study revealed that a one-ounce serving of almonds has a similar amount of total polyphenols (antioxidants) as a cup of steamed broccoli or green tea.

Black Beans + Red Bell Pepper (or other iron foods with vitamin C foods such as cayenne or lemon juice)…Combining black beans or any iron-rich foods with a vitamin C-rich foods may increase the absorption of food state iron by six times!

Brown Rice + Almonds (or other calcium foods such as brazil nuts, cashews, and unhulled sesame seeds)…Brown rice is high in magnesium, which helps the body assimilate calcium. Food-state vitamins and minerals are by far the best way in which the body recognizes and utilizes these nutrients – the way in which nature intended them to benefit us. Chelated vitamins and minerals however, found in inexpensive supplements, actually do more harm to the body than good.

Wild-Caught Salmon + Collard Greens and/or Garlic…Vitamin D helps your body to absorb calcium. In fact, if you have a vitamin D deficiency, it can cause a defect in assimilating calcium into the collagen matrix in your skeleton, leading to aches and pains. Collard greens being rich in vitamin K and phytonutrients that may help lower oxidative stress, fight inflammation, and prevent cancer.

Here’s the link to Dr. Mercola’s original article, for more links to the sources of the research.